The Hollywood Literary Retreat was an annual by-invitation only weekend retreat for leaders in the entertainment and tech industries focused on the roots of storytelling. HLR was founded in 1990 by Writer/Producer Lynn Isenberg.  The concept for HLR was born when Isenberg combined her desire to recreate her beloved NELP experience (UofM’s New England Literature Program) with a chance visit to the National Storytelling Festival.  Isenberg produced HLRs at Zaca Lake, CA and twelve Hollywood creative skills seminars in Detroit and LA.  HLR was operational from 1990 – 2000, 2013 – 2015, and received national and regional public acclaim.  In 2015, HLR was rebranded to Hollywood LIT: Literature. Intelligence-Investing. Technology. and carries the community forward with newsletters, zoom events, and podcasts. 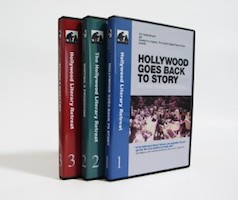 Hollywood Goes Back to Story